July Morning is a hippy festival that occurs in Bulgaria in 1986. The name of the holiday is associated with the eponymous song by British rock band Uriah Heep – July morning. For 30 years every June 30, a lot of people gather on the Bulgarian coast to meet with the first July sunrise.

The celebration is not known in other European countries and considers that arose as a protest against communism. It seems like welcoming the sun is welcome to a new beginning auspicious better future. Over time, the festival lost its original idea, but it remains as the first rays symbolizing nascent life are a major cause people to celebrate the July morning. Now the idea of a July morning connects rather with escape and complete liberation from the shackles of the big city – a celebration of the soul.

According to tradition, the sun greets from the sea coast, but we decided to see the first sunlight July high of the mountain. We chose the prince of Pirin Mountain – Vihren peak (2914 m.). In the late afternoon of the last day of June, we headed to the mountain. We estimated everything because we wanted to be on the top right for sunset and to combine the last June sunset with the first July sunrise.

I had been on Vihren peak several times before and for me, it is the definitely difficult peak. This time the challenge was the fact that I wore over 11-pound backpack. And I must be able to take it to the top. Some light hints of nervousness overcame me because of luggage override on my shoulders, and I knew how much time we have to walk.

After some time walking my body used to load and I managed to deal with the demons in my head that screamed – “I will not handle.” Of course, Pepy helped me a lot. At one point I turned to him with the words – “I will fail. We can’t be on Vihren peak for the sunset, it’s very difficult for me,” and he said with a smile, “We don’t hurry, we’ll sleep on the top.” These words seemed won over all the worries in my head and I relaxed. At this point, I started to walk like I’m on another walk in the mountains.

I no longer felt the weight of the backpack. I stopped rushing in my head. Then the most natural thing that happened was to enjoy the road. As I like to say often – it is not important to end goal but the road to it. We walked, talked, smiled, stopped to rest. Everything was wonderful.

Time come imperceptibly. We climbed over 500 meters displacement and soon found ourselves at the foot of the majestic pyramid, which was to climb – the last step.

Overall I can divide the road into three parts – the first is convening a slope, the second is the pleasure of walking and the third – the conquest of Vihren peak. All three are imbued with different emotions being shared leave an incredible memory of the experience.

We were considering where we could spend the night. Our idea was to get on top for the sunset – that at one time was a reality. We could be on the top right in time. We decided to sleep at the foot of the top of the morning to become early to get up for sunrise.

So we got to the last third step – the conquest of the summit. The weather was dynamic and we didn’t know if we can see the setting sun. Fireball now appeared, then it was hidden by clouds. When we got above the sky was all paved in clouds and far away on the horizon visible sketchy shades of the setting sun. Actually, we didn’t see the sunset because of the clouds, but we were extremely happy. There – above, in the high.

We decided to spend the night on top. We found a place where we could stretch the tent. We found and went inside to warm, because as soon as the sun disappeared temperature significantly reduced.

The enthusiasm and happiness of all were growing with each passing second. The idea that we are so high was freaking us out. Despite the cold, we decided to go outside. We were looking beautiful night sky, which revealed millions of stars.

We sat huddled in each other, staring into the distance, lost in the vastness of the stars, conceived of the universe. The feeling was indescribable. Silent and just watched. The weather was not suitable for photos, but what we saw with our eyes was unforgettable. Our evening ended with lofty thoughts as elevated as we were in this wonderful moment. God, we were on one of the highest peaks in the Balkans and we were going to sleep there! 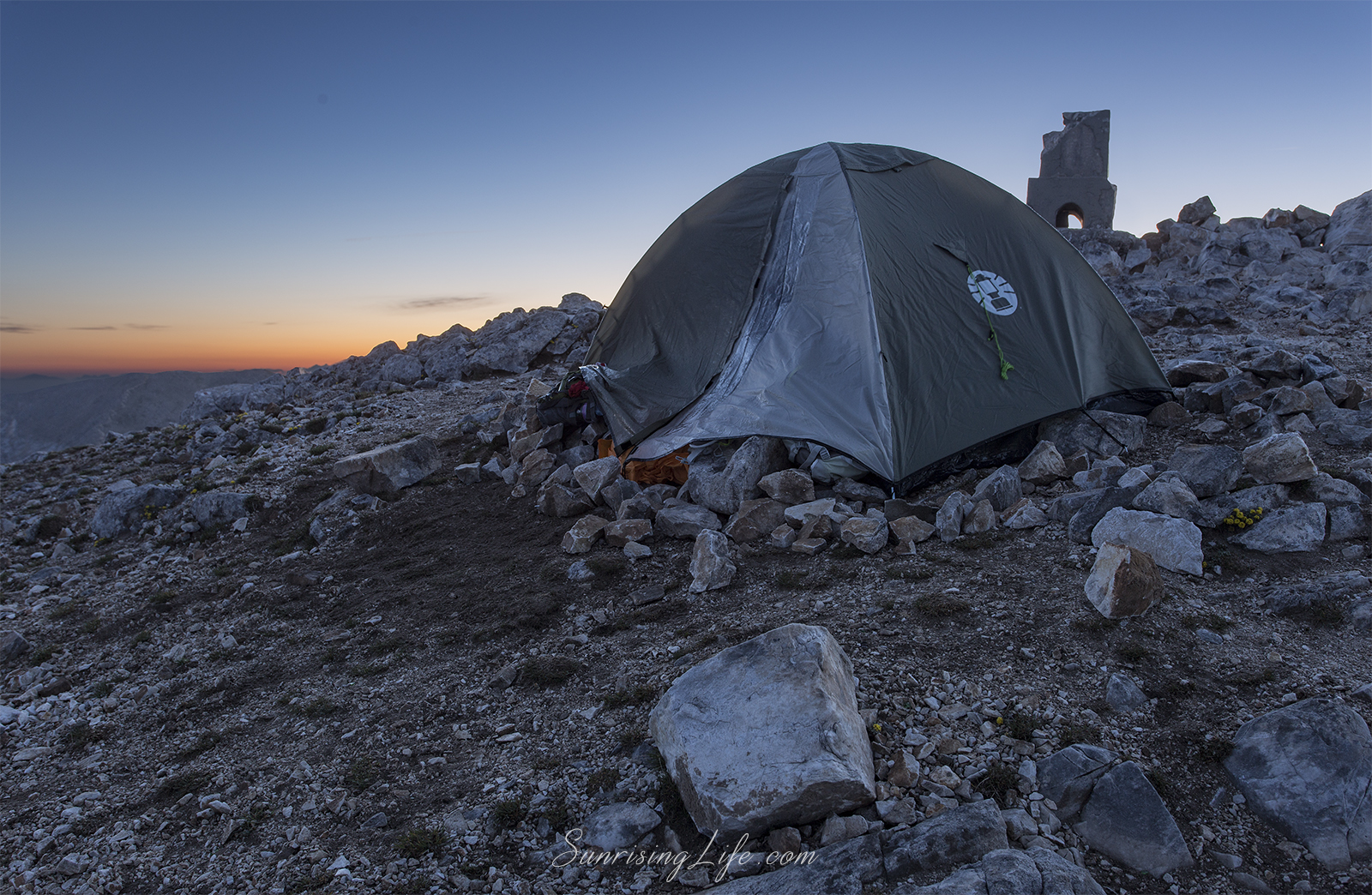 We got up early in the morning to enjoy the first sun rays. Quickly fixed the luggage and calmly watched first July sun. It seemed to bode really a wonderful new beginning or an even more colorful sequel – I do not know. All I know is that the whole experience was heavenly. In views that reveal a man could lose his mind. The sun quickly appeared, and we sat and admire this great phenomenon, without which we would not be here now. Without which we wouldn’t be at all.