This small and picturesque place is located in southwestern Slovenia on the shores of the Adriatic Sea. The town is on the eponymous island in the Bay of Piran. His name is of Celtic origin and means village on the hill. It is one of the best-preserved monuments of culture in Slovenian Istria. With its narrow streets, tall houses and small arcades, Piran has preserved its medieval appearance. The architecture of the city is strongly influenced by the Venetian Republic, which you can notice when you go there.

We visited Postojna Cave we headed to the beach to see this treasure of little Slovenia – Piran. The road passes by the two other seaside resorts – Koper and Izola. Even before you enter the city began the signs that indicate the direction of the parking. In order to keep the city in the charming appearance, the Slovenes have made great parking at the beginning of the city. There, visitors can leave their cars and then free shuttle bus drives them to the city center. We left the car and we headed on foot to the city center.

Piran is famous for the many festivals that are organized there. We were lucky enough to come across a festival of riders. In the whole city was full of riders. With the entry into the city,  there was an airplane in the sky, which was hooked fluttering inscription „Welcome riders”.

The resort was seething with energy and was full of smiling people came from all over the world especially for the festival.

The town can be a circuitous walk literally for an hour. So small, but at the same time hiding the magic of the sea and the spirit of the Middle Ages. Finally, We sought a place where they can have a nice lunch and found ourselves a significantly less square, where a group of young people with their conductor brought out a musical program. We enjoyed the soft sounds of brass instruments.

Listened to the pleasant melody, feeling a smell of the sea and we were really happy. Of course, we didn’t miss to try some seafood. The food was tasty and fresh.

After dinner, we headed to the seaside promenade to watch the sunset. Maybe you have already understood that we love the sun and the cycles of life. The big fireball was going down and we once again witnessed this miracle. 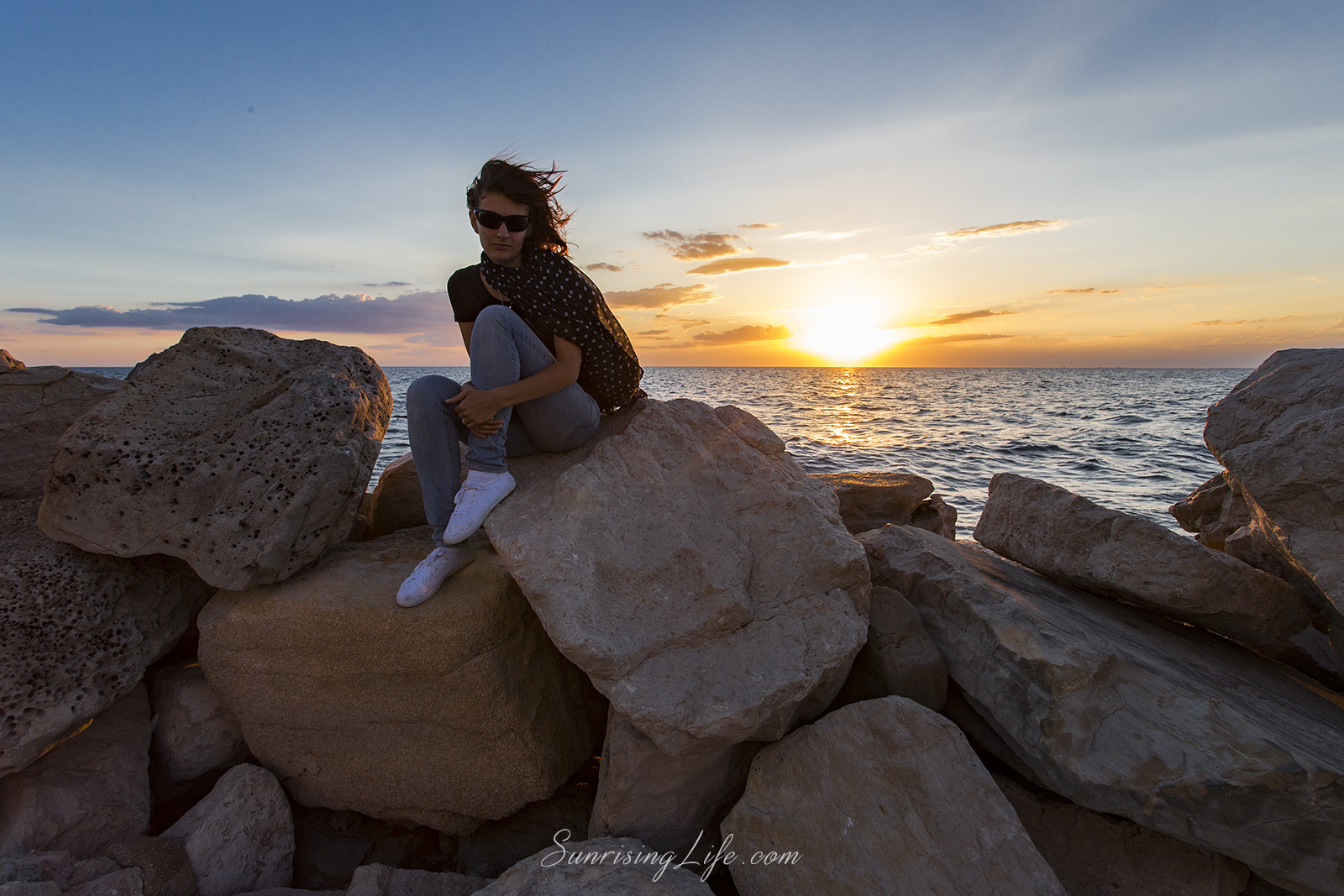 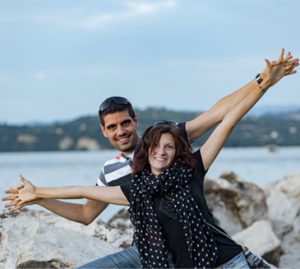 After the sun sank we continued walking along the sea. When we get to the end of the lane we headed towards the center of Piran. The performance of the riders was already over and everything had gone quiet. A calm reigned in the city center. At the heart of the resort, there is the “jewel” of the city – Tartini Square. It is named after Giuseppe Tartini – the composer and violinist, thanks to whom Piran gained world renown. Its statue stands in the center of the square. 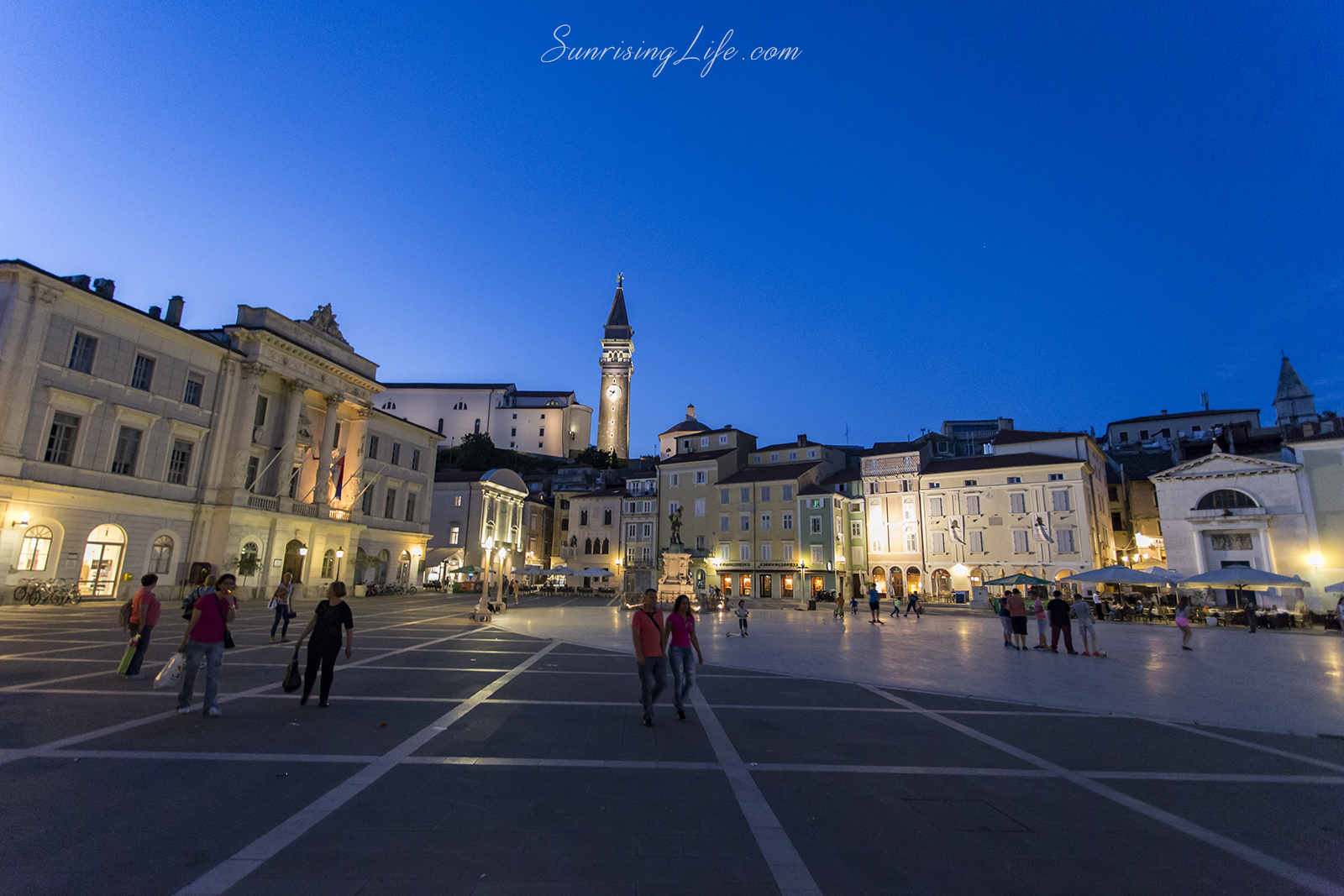 The center of Piran

Certainly, when you go to Slovenia, we recommend you jump off to this small, tucked away town. Take a walk on the narrow streets, dine at a local restaurant, enjoy delicious seafood, hear the noise of the sea, smelling the sea breeze, take a dip in this heavenly place that supposedly is so small and you can actually experience so much.