Home TRAVELSEurope Assisi – the sacred city to the Catholics
Europe

Assisi is located in the central part of Italy in the province of Perugia, Umbria. The city is at the foot of Mount Subasio. It is considered as the religious center by Catholic pilgrims, due to the fact that it is the hometown of Saint Francis.

We visited Assisi at a time when there were not many tourists, and we had the opportunity to enjoy the majestic buildings without having to push around in crowded places.

The square in front of the Basilica of St. Francis

The first inhabitants of the Assisi settled on the territory in the 1st century BC – they were called – Umbri. In the Middle Ages, it was a kind of battlefield with other city-states. Especially a great flourish is marked during the Renaissance.

In 1181 Giovanni Francesco di Pietro Bernardone was born in Assisi. He is a child in a wealthy family, but it doesn’t seem to be his place. Already during his early youth, Francis changed his way of thinking and started living as a self-pity. He believes that this is the way to express the connection and love to God. One of the main ideas in his worldview is “you shouldn’t have anything” and take care of your soul through repentance. In 1209, Francis appeared to the Pope of Rome and, together with his followers, gave vows of obedience to the pope. That’s the time when San Francisco created the Franciscan Orden.

Nowadays, Assisi is a sacred place for all Catholic worshipers. After St. Peter’s Basilica in Rome, Assisi is the holiest place in Italy. When a person goes there, he notices that there really is a divine particle in this place.

The sights of the city related to the work of Saint Francis are listed as UNESCO World Heritage Sites.

What to see in Assisi?

The complex was built in the 13th century and comprises two churches next to each other. You should enter at the first one,  and leaving it you will find yourself in a small courtyard that St. Francis and his followers once used for seclusion. After that, you will enter the second church. The lower church is in Roman style, while the upper one, which was completed in the middle of the 13th century, has gothic notes. The complex is one of the most impressive things in town and rightly so. 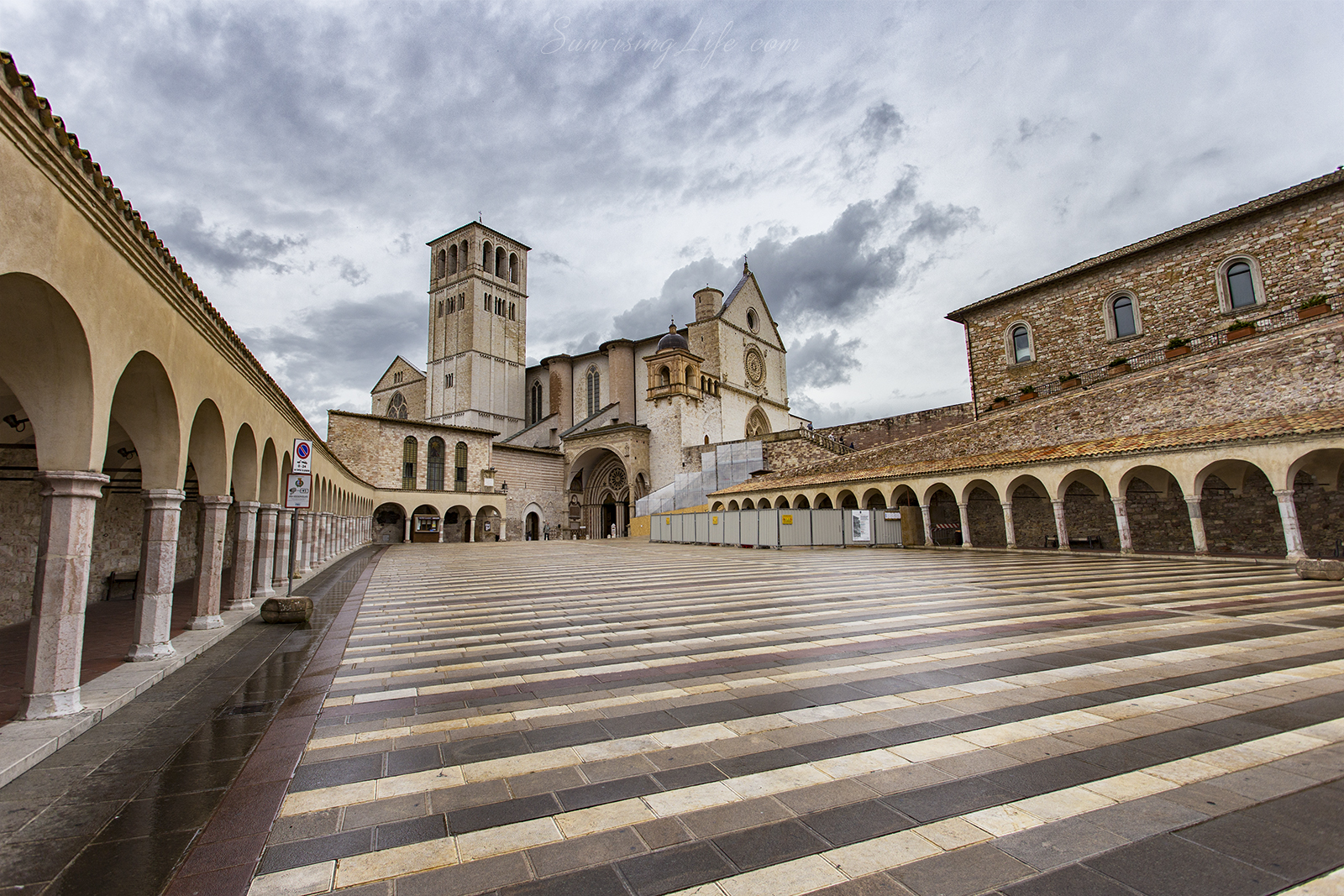 The entrance of the temple dates back to the 1st century BC. The building itself became a church in the 16th century, and although it was renovated in the 17th century, its façade has its original appearance.

The streets of Assisi

Typical narrow Italian streets will undoubtedly bring a smile to the visitors and you will definitely feel the spirit of Italy. It’s like “there is a smell of the country”. You will admire the beautiful facades of ancient buildings that are decorated with beautiful flowering flowers.

We didn’t have much time this day but when we back to Assisi we want to see also – Roka Major Castle, San Rufino Cathedral, San Damiano Monastery, Capitano del Popolo Castle and more, and more.

After Assisi, we went to Perugia. Italy is a beautiful country and everyone can find something for himself.