In this article, I will write you about our holiday in Albanian south coast.I will tell you some facts about Albania and I will try to give maximum impartially and objectively what you can see in its southern seashores.

Recently we’ve heard great reviews about Albania and guided by the opinion of all we decided to visit. So a small group of happy people went to this „mysterious“ European country with great expectations created by the incredible things that we heard.

We headed to the south of the country and in particular in the town called Ksamili, near the Greek border. Actually, Ksamil is a small archipelago in the Ionian Sea, which consists of four small islands – The Twins, The Emerald, The Stone and The Small island. 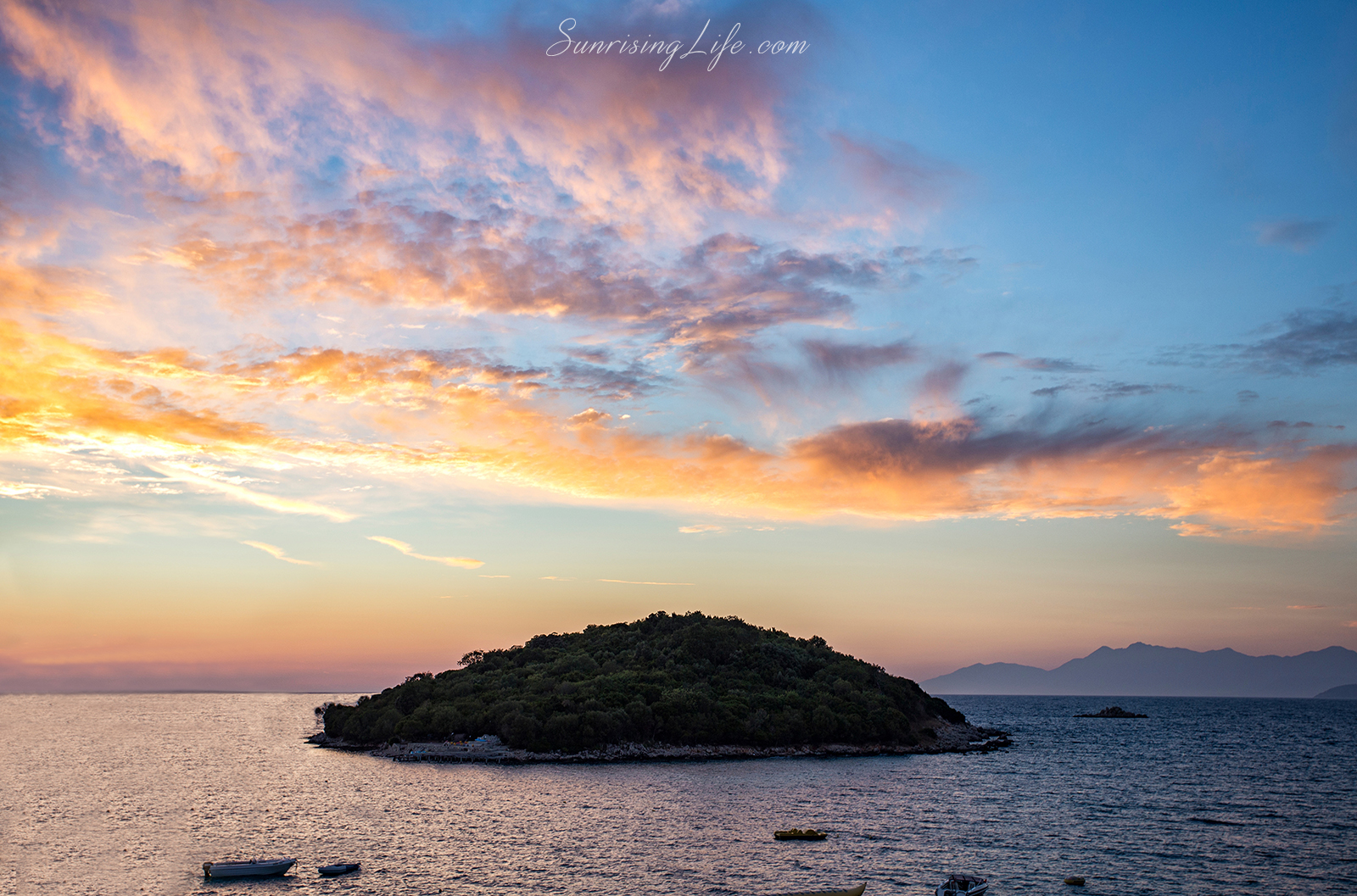 Since we spend our vacation in southern Albania, we decided to travel through Greece. One interesting thig happened on the Greece exit it was that you must leave your car, go down and go to a small counter where you give the documents. But I will not dwell on it if you decide to travel that way will see by yourself.

Going into Albania started with some not so „picturesque“ landscape reminiscent rather a forgotten, dry desolation. Wherever you turn there were strange, wild-lawns, bushes and thorns understand. After a few kilometers, there was a makeshift sign that says „Ksamili“ and pointing to the left. We made this turn ad the adventure began.

We turned left and found ourselves on a dusty gravel road, where local allowed to ride with maximum 50 km / h, but if you appreciate your car hardly you can drive faster than 20km/h/. About half an hour later driving leads to Lake Butrint, which should be passed with something like a raft on the symbolic 3 euros. You can see the video at the end of the article more than 5-minute switch from one to the other shore.

Then about 15 minutes later we reach the cherished goal – Ksamili. We left luggage, we rested and we went for s short walk to know the city.

I’ve red a lot of articles by which Ksamili is „tropical paradise of Europe“, but to be honest is quite far from the word paradise or at least my ideas about it.

We turned out that the village has 2-3 beaches, two of them are extremely small. At first glance collect maybe 30-something man. The third is quite a bit larger. Everywhere there are deckchairs and umbrellas, and a free zone no. The sand is white and as you step on it rather you feeling fine lime than sand.

We decided that we will seek for other beaches. The next day after we rested we went to search for new places to sunbathers. The whole coast is dotted with small coves that can be reached after overcoming some 200 meters negative displacement. The problem is that this was happening on dirt roads where absolute chaos reigns. Contrary to our expectation that the car that climbs the hill had an advantage there the priority is brazen – in the case the cars that come from above.

The first beach we reached was crystal clean and clear water. Indeed, if you were in paradise, but if not touching the ground, which is littered with all manner and size stones. There in no sand, the free zone is relatively large, but there were only stones and rocks.

The next day we found a little cove, which can be reached by passing through the water along issued a sea cliff. There were a few square meters, which had sand. Everything else was covered with stones, where even walking without shoes was a complicated task. Then I realized why there all people were walking around with some closed beach shoes.

Happy to have sand on which to put our towels, we decided that this is our beach. By the end of the holiday, we went on it. Of course, nothing is perfect – with each day the sand was becoming less and the stones was becoming more and more.

On steep rocky slope ramp that encircled the wild beach all day goats pushing large rocks. One day even a huge stone fell inches off my towel after being rolled from the top of the rock and made an impressive pirouette in the air.

All it contrasted brightly with the things that we had heard and read about Albania. Maybe some of them were treated for northern parts of the country. But others are sheer lies that can quite mislead the reader and the person seeking for a new beautiful place for their summer holidays. One of the days we asked a local if there are some nice beach around and his words were „All beaches from the border with Greece about 100 kilometers up are rocky. The sandy beaches are at north. “

So if you are fans of rocky coast Ksamili is your place and I’m sure you will enjoy it. 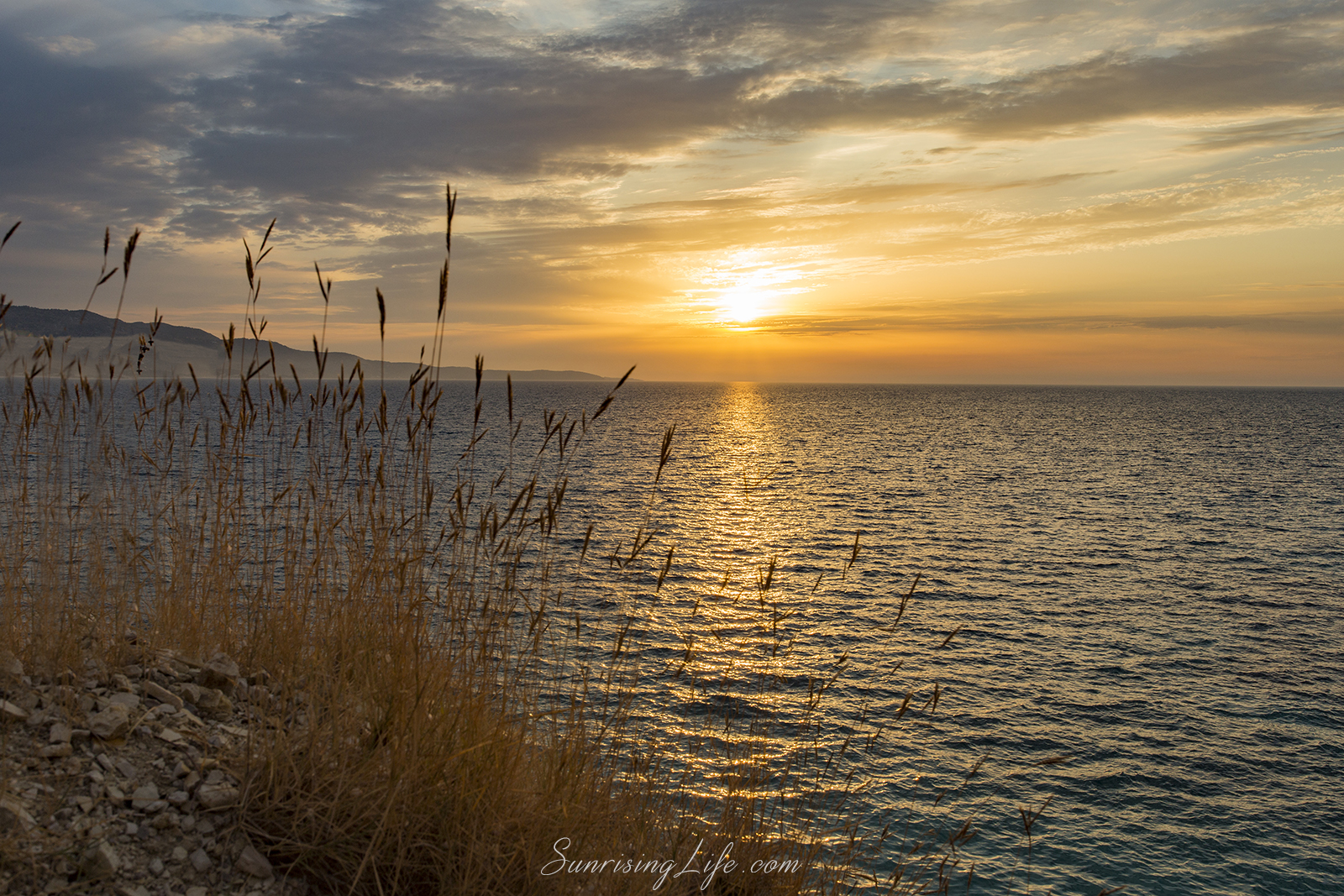 We spent about a week there, still, we had to find something positive and enjoy your stay. The water was crystal clear with beautiful blue-green colors. All around us were swimming different sizes and different colors marine fish. I read again my favorite book read over dozens of times – „The Little Prince“ and enjoyed the sunsets. The sunsets were amazing. The big fireball sinking into the vast sea. We have seen 6 nautical twilights. Every day we said as a little prince, „I love sunsets. Let’s see one. „

A beautiful sunset can reverse even the worst day.

Have you ever been in Albania? What are your opinion and experience?